• "Teaching Journalism in an Age When News Comes to You" by Lynne Russell on MediaShift. More than ever, j-school must teach its students how to evaluate a source. 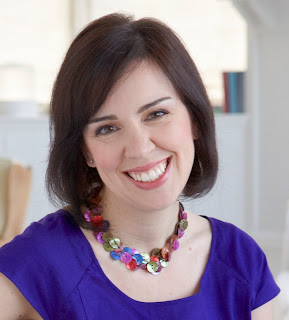 THE BIO
WHO: Chandra Turner, executive editor, Parents; founder and president, Ed2010 [a networking community of young magazine editors]
WENT TO SCHOOL FOR: Journalism, Indiana University. “I always knew that I wanted to go into journalism. By junior year in college I knew I wanted to be in magazines specifically.”
INTERNED AT: The American Legion Magazine, in Indianapolis
WHAT ELSE SHOULD WE KNOW ABOUT YOU, CHANDRA?
“What I'm most excited about right now is Ed2010's new program for interns with the American Society of Magazine Editors: the ASME Next-Ed2010 Magazine Career Training Course. It's a 10 week workshop [in New York] this fall for editorial interns to learn about everything from writing and editing for the tablet to marketing and sales.” Read more... 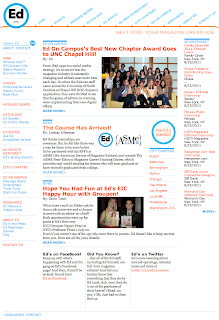 SO CHANDRA, TELL US...
WHAT MAKES A GOOD EDITOR?
It used to be just being able to line-edit copy. But now it's so much more than that. It's having a way with words and knowing how to use those words to reach your readers in more ways than just print. On the tablet. On Facebook and Twitter. Through video. Blogs.
FAVOURITE PART OF BEING AN EDITOR?
I love that no day is ever the same. There's so much variety in what I do. Some days I'm choosing audio that goes along with a recipe how-to video. Other days I'm looking at film from a photo shoot of an adorable baby. Or I'm selecting toys for the Best Toys of the Year guide. Or, I'm hunched over my desk untangling a complicated story. Or killing myself to come up with snappy cover lines. All the days are different, which makes it never boring. Nice to know I won't burn out for a while!
WHAT ADVICE WOULD YOU GIVE TO EDITORS JUST STARTING THEIR CAREERS?
Meet as many people as possible in as many different editing positions as possible. Find out what they do and what they love about their jobs. Even if it's not something you'll want to do yourself, it's good to know what everyone else does. It helps you figure out how you fit into the whole equation.
MOST MEMORABLE EDITING MOMENT?
There are tons. The obvious is that it's fun getting to meet and work with celebrities or other notable people. At Parents, a senior editor and I emailed one of our food idols, food author Mark Bittman, on a whim. He invited us out to lunch, and we ended up hiring him as a contributing editor at Parents. Once he took us to [the restaurant] Jean-Georges, where we got to meet Jean-Georges [Vongerichten] himself! I'm a foodie so it was exciting.
I've also been invited to the White House, the UN,  and all kinds of other interesting places I'd never otherwise get to go.
One of my favorite professional moments was when I was an EA at Good Housekeeping. Back in those days assistants didn't do much with text other than copy it and schlep it around the office. One week my boss was away on vacation and her top editor, Diane Salvatore (now the EIC of Prevention), asked me to edit one of my editor's stories in her absence. I worked so hard on that story – it was a small piece, actually, like 500 words. But Diane said I did a "superb" job on it. Her feedback gave me confidence that I could make it as an editor. Incidentally, she went on to hire me a couple years later at YM and then again at Ladies' Home Journal.
WHAT MAGAZINE DO YOU THINK IS DOING AN OUTSTANDING JOB RIGHT NOW?
I love, love, love the new Bon Appétit. I never really got into the old Bon Appétit. Too many recipes that I wouldn't ever have time or ingredients to make. But the new BA is like New York Magazine (another fave) meets food. It's gritty and real and sophisticated all at once. I haven't ripped pages out of a magazine in ages, but am with Bon Appétit. It's nice to fall in love with a new magazine. I was afraid I wouldn't again!
WHERE TO FIND CHANDRA ONLINE:
Parents website: Parents.com
Ed2010 website: Ed2010.com
Ed2010 on Twitter: @Ed2010News
Comment
Tweet
Tuesday, August 23, 2011
Reading List, Aug. 22
A weekly roundup of job-hunting tips, career advice and interesting articles relevant to the magazine industry and being an editor.

• "5 Ways to Save Your Writing Clips From Oblivion" by Susan Johnston on The Urban Muse. Practical tips on how to keep your digital clippings.

• "One Mentor’s 10-Step Job Interview Process: Where do You Fall Out?" by Todd Herschberg on YouTern's The Savvy Intern blog. The inside scoop on how one employer weeds out job candidates.

• "Boston Globe Creates a Twitter Board for the Newsroom" by Justin Ellis on the Nieman Journalism Lab. If you want staff from all departments to get more involved in social media, increasing awareness about what your brand is doing may be the ticket.

• "How Journalists See Each Other" on DigiDave.

• "Making the Leap from Editor to Content Strategist" by Sara Zailskas on the American Society of Business Publication Editors blog (via WordCount). Lost your job as an editor or just tired of magazine publishing? "Content Strategist" could be your next career move.
Comment
Tweet
Monday, August 15, 2011
Reading List, Aug. 15
A weekly roundup of job-hunting tips, career advice and interesting articles relevant to the magazine industry and being an editor.

• "Today’s Publishing Career: We Are All Vulnerable" by Robert Sacks on Publishing Executive. It's highly unlikely you will hold your current position for the rest of your career. Even if you're happy with your job, it's important to have your next step in mind.

• "A Rogue Tweeter Titillates, Then Vanishes" by Jeremy W. Peters on The New York Times' Media Decoder. Ok, so you may be sick of hearing about the faux Twitter account that received a lot of media attention last week, but if you haven't read the @CondeElevator feed yet, do. It's terribly amusing.

• "Interns Should Get What They Want or Else Walk Out" on Interns Anonymous. If you're not learning anything at your internship and are just doing busywork, you don't have to stick around. I wouldn't recommend following the author's lead in how s/he left, though; be polite and professional in your departure.

• "Modifying Resume Job Titles Risky… Unless You’re Honest" by Dawn Rasmussen on YouTern's The Savvy Intern blog. Even if you want to change a job title on your resumé to more accurately represent the actual work you did, there are good reasons not to.

• "Are Your Co-Workers Killing You?" by Jonah Lehrer on Wired.com. Yet another reason to leave that toxic workplace sooner rather than later: the stress of being surrounded by nasty co-workers could shorten your life.
Comment
Tweet
Thursday, August 11, 2011
Editor Profile: Peter Carter of Today's Trucking 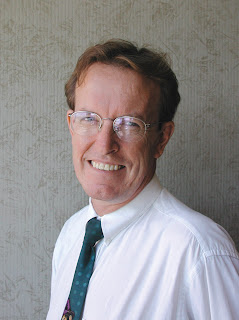 SUBSCRIBES TO: MAD. “The rest I get at work. We also get Best Health at home.”
WHAT ELSE SHOULD WE KNOW ABOUT YOU, PETER?
I love my job so much, my wife, Helena, doesn't let me call it work. Magazines are the only medium whose job it is to make the world a better place. Almost every successful magazine wants things to improve for its readers. Whether it's your golf swing, your fly-fishing cast, your pie crust, your crochet patterns, your health, your politics... It's not enough to tell readers facts like newspapers or CP24 does; magazines help readers make choices that make them happier, and advocate for their readers' well being. And also, magazines listen to their readers. Magazines have to care for their readers as individuals in order to succeed, and they want those readers' lives to improve. From Allergic Living to Zoomer, every magazine worth the name wants its readers' world to get better.
SO PETER, TELL US...
WHAT MAKES A GOOD EDITOR?
Being simultaneously open-minded and closed-minded.
While an editor has to see story possibilities under every dust mite and therefore be open to wholly new approaches to story telling, a good magazine should never go out of focus, nevermind how clever an idea is or whose byline is on it.
FAVOURITE PART OF BEING AN EDITOR?
The world is your McDonald's ball pit. It's so much fun, it's hard to believe your mom lets you in.
There's a daily learning curve; the day you don't learn something new is the day you owe your employer his or her money back. A good editor has to be iconoclastic and indulge their own ADD to the max. You get to write as much as you please; playing with words is something you take very seriously, but you do so knowing that words are more powerful than firearms.
WHAT ADVICE WOULD YOU GIVE TO EDITORS JUST STARTING THEIR CAREERS?
Read Mastheadonline.com.
And remember on those days when you're feeling like dirt for having to compose yet another "Sponsor Profile," we've all been there. Nobody ever holds it against you. Also, at those depressing moments, remind yourself that the amount of intellectual liberty that magazine editors  enjoy – even when they're working for salted cashews and/or absolute dweebs – is astounding, compared to almost any other profession.
MOST MEMORABLE EDITING MOMENT?
I was editor of Metro Toronto Business Journal. My co-editor, Okey Chigbo, was nominated for a Kenneth R. Wilson Award for a story about Peter Goudas, an entrepreneur who produced packaged spicy food with international recipes from around the world. When the emcee announced the prize, my headline for his story got a laugh, and it was from one of the toughest audiences ever: headline writers. The headline?  "A Man for All Seasonings."
WHAT MAGAZINE DO YOU THINK IS DOING AN OUTSTANDING JOB RIGHT NOW?
Are there any, besides Today's Trucking?
Actually there are more great magazines than ever. The writing's better; the research is more rigorous and the audiences are more demanding. That said, Men's Health and Best Health immediately spring to mind as publications that are spot on their games; neither a wasted word nor self-indulgent page between them.
Also Esquire. Did you see its [August 2011] cover? (Another outstanding editor, Jason Rhyno of Job Postings Magazine, showed me that.)
National Geographic, too, never fails to astound. Pick it up sometime.
WHERE TO FIND PETER ONLINE:
Today’s Trucking website: Todaystrucking.com
Twitter: @Todaystrucking and @editorpeter
LinkedIn
Facebook: Facebook.com/Editorpeter
Email: peter @ newcom .ca
Comments (11)
Tweet
About Me
Corinna vanGerwen